As you review our website, you will come across various terms and descriptions which may not be familiar to you. Over the next few pages, we have summarized some of the major terms and definitions relative to our website, and the Bankruptcy and Insolvency Act, which governs the debt relief process. An alphabetical summary of our major terms follows:

References to “The Act” relate to the Bankruptcy and Insolvency Act, a federal statute which provides the legal framework, rules and regulations governing the administration of Consumer Proposal and Bankruptcies.

A Consumer Proposal is Annulled, meaning “cancelled; set aside”, if the Debtor fails to comply with the payment terms of the Consumer Proposal. Upon Annulment, the Creditors’ rights to take legal action to collect the debts owed to them are revived (reinstated).

A Trustee is required to provide to / discuss with a Debtor, his options to deal with debt, the ramifications of those options and ensure the Debtor is comfortable with / understands the related terminology, procedures and duties.

A Certificate signed by the Trustee and the Debtor confirming the Assessment (as defined above) has been completed and confirming/indicating what option the Debtor has chosen.

All of the property, either real property or personal property, owned by or in which a person has an interest, including furniture, personal effects, vehicles, real estate, recreational vehicles (boats, motorcycles, snowmobiles, holiday trailers), mobile homes, pensions, RRSP’s, RESP’s, life insurance, work tools, an interest in a law suit, accounts receivable, etc. Assets may be exempt from seizure or not exempt from seizure.

See above “The Act”.

The administrator of a Consumer Proposal issues a Certificate of Full Performance confirming that the Debtor has made the prescribed payments offered by the Debtor and accepted by the Creditors and completed any other requirements set out in the Consumer Proposal. The Debtor then has no legal liability for any remaining debt.

A procedure to be used by Debtors with primarily Consumer Debt – the rules place limits on repayment timeframes and limits on total Debt.

A Debtor is granted the privilege (right) to borrow money form lenders who may impose a limit to the amount to be borrowed and will determine (dictate) repayment terms.

Another type of Proposal, with different rules, to be used in different situations. (Originally intended) Primarily for commercial purposes. Primarily used for people with significant income or those who would like to keep assets that would otherwise be available to their creditors in a bankruptcy.

The Administration of a Consumer Proposal will convene a Meeting of Creditors only if required, based on the rules of the Act, the purpose of which is to give consideration to the Consumer Proposal.

A person or business is Insolvent if:

– They cannot pay their debts as they become due; and/or

– The value of their assets is not sufficient to pay their debts;

– They have ceased paying their debts in the ordinary course of business.

A person must be Insolvent to be eligible to file a Consumer Proposal.

Two persons who have all or substantially all the same debts may file one Consumer Proposal together.

Upon borrowing money from a lender, the person borrowing (the Debtor) has a legally enforceable obligation to repay the loan – a Liability.

The Official Receiver is the local representative of the Office of the Superintendent of Bankruptcy, who administers the Bankruptcy and Insolvency Act, including overseeing the filings of Consumer Proposals and Bankruptcies.

A Creditor is required to prove to the Administrator that a Debtor has borrowed money and has a legally enforceable obligation to repay the loan.

A Debtor is required to disclose all of his assets, liabilities, including an estimation of the value and amount owing to Creditors, income and expenses, and certain other personal information, and provide a sworn declaration that the information is true, accurate, and complete. This Statement of Affairs comprises part of the documents filed with a Consumer Proposal.

STATEMENT OF INCOME AND EXPENSES

A Debtor is required to disclose his estimated family income and expenses so that his Creditors can evaluate whether the Consumer Proposal is reasonable and attainable.

STATEMENT OF RECEIPTS AND DISBURSEMENTS

The Administrator of a Consumer Proposal periodically reports to the Creditors who have proven their claims, what funds have been collected, what expenses have been paid and the amounts available for distribution to them (the Creditors). 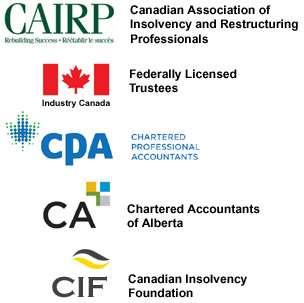